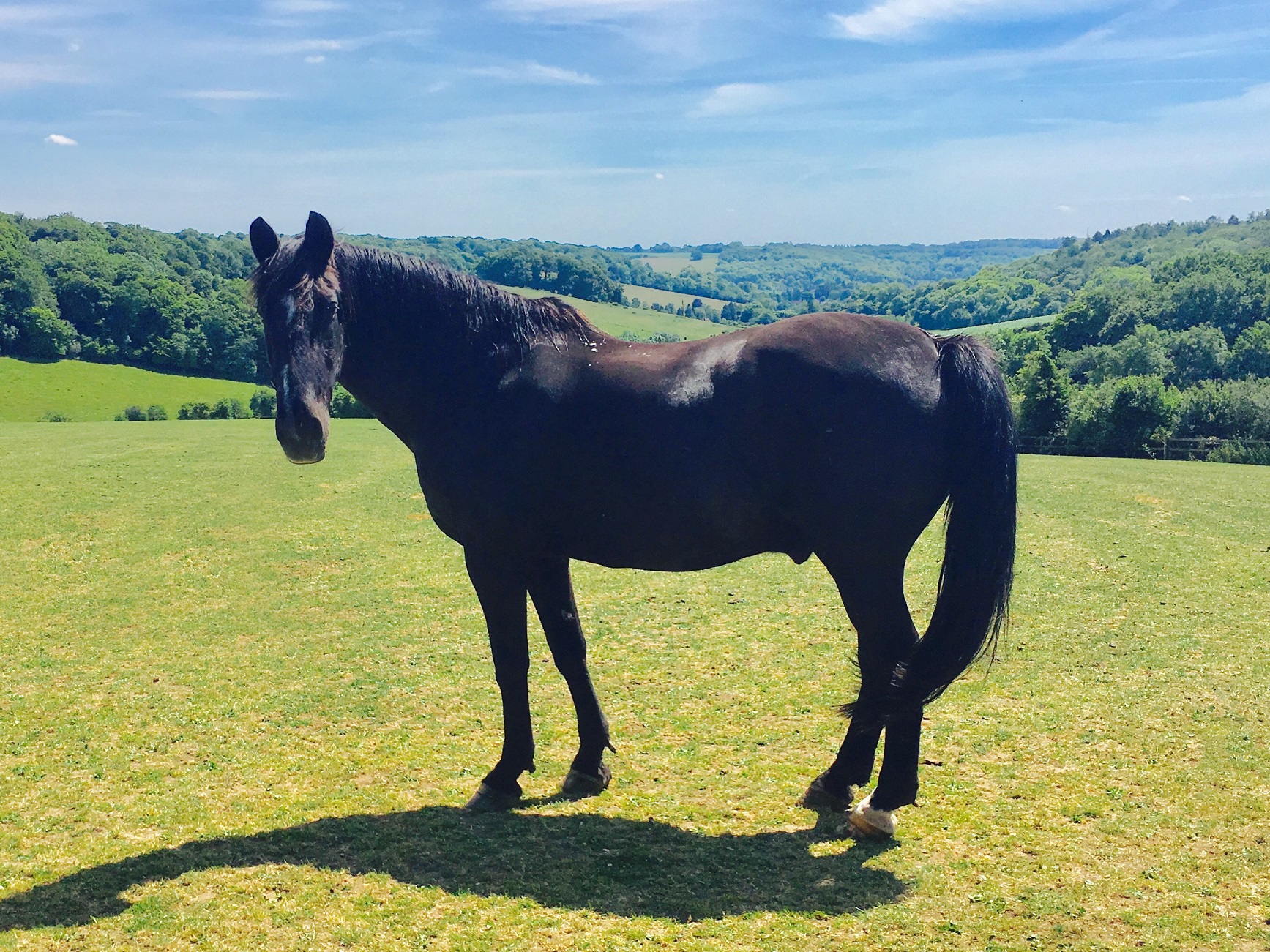 Viscount cools down with a shower after arrival

Viscount served The Household Cavalry with distinction in all aspects of service, from parades to training new recruits. His calm demeanor saw him rotate around different posts throughout his service, being an Officer’s Charger to Royalty on ceremonial parades.

Viscount completed his military training age d just 5, passing out in as a Military working horse in 1997 and went on to spend time with the Queen’s Life Guard at all the major State parades.

In his last four ceremonial seasons he carried musicians from The Band of the Household Cavalry; a duty notable for requiring calm and consistent horses that can be ridden with limited instruction as the musicians largely give direction using only their legs while carrying their instruments.

After the last of his duties Viscount went to the Defence Animal Centre before retiring to his new home at The Horse Trust. Viscount stepped off the lorry very calmly on the hottest day of the year and enjoyed a long cooling shower from the Trust’s Care team before being released into the fields where he quickly befriended fellow Household Cavalry Mounted Regiment veteran Belize who had retired on the very same day.

Viscount has taken the mantle of ‘Longest serving Military horse’ from Remus who also retired to the Horse Trust in 2012. Just like Viscount, Remus was a truly remarkable horse and began service in 1991 as a four-year-old serving for an incredible twenty-one years until arriving at the Trust at the grand age of twenty-six to enjoy a well-deserved period of peaceful retirement after his long service.

At their Home of Rest The Horse Trust has specialised in providing retirement and respite for working horses and ponies for 130 years. Army veterans have been provided respite and peaceful retirement since the Boer conflicts in the 19th century and during the First World War patrons of the Trust provided the first ever motorised horse ambulance to help transport wounded horses from the front line in France. That ambulance travelled 13,000 miles in just 2 years and carried over 1,000 horses to veterinary hospitals where they could be treated. The War Office commissioned more vehicles and by the end of the war fourteen of them were in operation in France, saving many thousands of horse’s lives. After the war, The Horse Trust retired horses that had served on the front line and today this work continues as military horses arrive at the Home of Rest in the beautiful Chiltern hills for their retirement.

Jeanette Allen, CEO of the Horse Trust said, “The Horse Trust is proud of its relationship with the Household Cavalry Mounted Regiment and providing horses like Viscount with a home in their retirement after a lifetime of public service is our privilege.  With the help of our donors we are able to provide these hard-working equine civil servants the opportunity to relax and enjoy their twilight years just being a horse.”