Looking out for laminitis

According to Redwings Horse Sanctuary: “One of the major issues, which affects the number of laminitis cases in this country, is a lack of knowledge and awareness amongst horse owners of laminitis itself.” Make sure you are fully aware of the signs and symptoms of laminitis and as spring approaches take precautions to protect your horse. 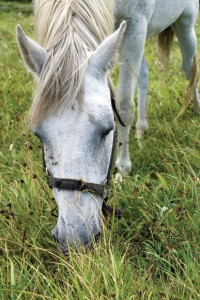 Laminitis is one of the most common causes of lameness and disability of horses, ponies and even donkeys in the UK. It tends to bring an image to mind of a horse leaning backwards in an attempt to take the weight off his agonizing front feet; a scenario that simplifies what is in fact a very complex condition.
It affects the delicate tissues, called the laminae, which bond the hoof wall to the pedal bone. When the condition strikes, the laminae swell, causing pressure inside the hoof and extreme pain for the horse. The progression of the condition can lead to tissue death and subsequently rotation of the pedal bone. Laminitis is more common in the front feet and rarely affects just one foot.
So what causes this lethal condition and why has it impinged on so many equines in the UK? There are many circumstances, which can lead to the onset of laminitis, but by far the most common is obesity. Metabolic changes in overweight equines are complex and an area of much research, as the exact process by which overeating leads to laminitis is not yet fully understood. The condition can also be caused by any of the following, although in most cases by a combination of factors rather than just one.
•    A carbohydrate overload: the overeating of lush grass and excessive quantities of concentrates.
•    Cushings disease: an hormonal disorder caused by a benign tumor of the pituitary gland.
•    Concussion injury: horses with low heels and flat feet and those repetitively worked on hard ground.
•    Infections: a release of endotoxins into the blood stream. A retained placenta after foaling is a renowned cause of the condition.
•    Trimming or shoeing: an overlong toe can be a contributory factor.

According to a general survey in America, laminitis is the most common reason a horse or pony will be presented for veterinary treatment, apart from colic. A large study in the UK in 1996 estimated that around 8,000 horses suffer from laminitis each year, around 600 have to be put down because of it and 1,300 animals are left permanently unsound.
As with any condition, the prevention of laminitis is better than any cure. The condition is painful and distressing and can be avoided with careful management and by owners being made aware of the above causes. There are masses of books and leaflets available on laminitis and with research changing all the time it pays to keep up to date with current thinking and new advice on controlling the condition.

Obesity in horses and ponies is a growing welfare problem with many being allowed to become overweight to the point where they are susceptible to laminitis. As such, it makes sense for owners to limit grazing if their horse or pony is vulnerable to the condition. Strip grazing is an excellent method to restrict grass intake and this is best set up with electric fencing so it can be easily moved to a new position to avoid over-poaching. A grazing muzzle is another way to restrict the quantity of grass ingested whilst allowing the horse to exercise and get a good dose of fresh air. Alternatively, you could restrict your horses grazing hours to nighttime when the sugar content (fructans) of the grass is lowest. The sugar content begins to rise at 9am, peaking at midday, before the levels reduce at 4pm.

There is a multitude of myths and theories on what to feed a horse that is susceptible to, or has suffered from a bout of laminitis. An American veterinary report in 2000 stated that 50 per cent of all laminitis cases could be prevented through appropriate nutrition. To make this simpler for you, The Laminitis Trust, the only registered charity dedicated to supporting research into equine laminitis, has established an approval mark for horse feeds after consultation with the Veterinary Medicines Directorate (VMD). Feeds are given approval when they reach a certain standard as outlined by the Scientific Committee of the Laminitis Trust. This takes into account ingredients, carbohydrate and starch levels, vitamin and mineral levels, manufacturing processes and quality control certifications.

•    Cereals and high cereal concentrates, such as coarse mixes should be avoided. Many horses and ponies in light work don’t require supplementary feed, although vitamin and mineral requirements must be met.
•    If supplementary feed is necessary in order to sustain animals in harder work, feeds based on fibre and oil with low levels of sugar and starch are recommendable.
•    If required, oil can be used as an energy source rather than starch.
•    When any cereals, apart from oats, are fed they should be processed by cooking (steam flaking, micronising, extruding or pelleting) to make the starch more easily digested, reducing the risk of starch overload.
•    Fibre should be fed at a minimum quantity of one per cent of bodyweight split between frequent meals. In many cases it may be more appropriate to feed fibre at closer to two per cent of bodyweight.
•    Meal sizes should be kept small (no more than two kg per meal for a 500kg horse or less for lighter horses and ponies).

•    Grass-induced laminitis is often thought of as a spring condition but this is a misconception; it is true that soluble carbohydrate levels will be highest when the grass is growing, but grass, in temperate climates, grows for most of the year with a flush in spring and autumn. Grass therefore poses a significant risk for susceptible animals all year round.
•    It is impossible to predict the level of fructan in pasture at any given time, therefore horses or ponies prone to laminitis should ideally be kept off pasture during the grass-growing season (spring until flower development and autumn).
•    Mature forages, such as late cut hay, are likely to be lower in water-soluble carbohydrate. Good hygienic straw, when appropriate, can also be mixed with hay to reduce its energy density.

With recognition of the symptoms and causes of laminitis, the devastating effects of the condition can be minimised. Remember, it is not just fat little ponies that can suffer from laminitis, all horses could succumb so whether your horse is large, small, old or young, you need to know how to prevent this life-changing condition.
For more information visit www.laminitis.org