When fed at the recommended levels, Mollichaff HoofKind Complete needs no further supplementation other than good quality forage such as High Fibre or Timothy HorseHage (both these varieties of HorseHage are suitable for horses and ponies prone to laminitis). For those horses and ponies in harder work, with increased energy requirements it can be fed with additional concentrates.

Said Tam Thompson, from Northamptonshire, “We have been using Mollichaff Hoofkind Complete for a year now for our two horses, Parker and Beau, and both have done extremely well on it.”

“Parker is a sensitive Warmblood, so doesn’t need extra fizz, but he is also huge at approximately 18hh, so needs lots of good nutrition to maintain his weight, or he starts to drop condition quickly.  Beau is a chunky Irish Sport Horse, about 15.2hh and as wide as a bus!  We were concerned that he could be prone to laminitis as he is a very good doer and so we wanted a feed that would give him what he needs without adding extra calories.  As both horses share a field, it needed to be the same food, though Parker gets much more of it of course.” 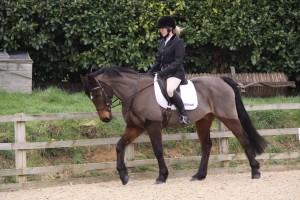 “I have never had to feed either of them more Hoofkind Complete than the recommended limit for their size, and both did really well last season keeping condition without fizz and without getting fat.  They both love it too – Beau squeals like a piggy at meal times!  Our farrier has remarked on how well their feet are doing, and neither of them have lost condition in the winter or gained lots of weight with the fresh grass in the summer.”